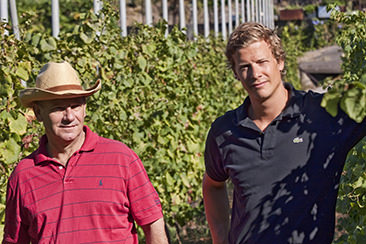 Blandy's Madeira is a family owned business with over 200 years of experience in producing the finest quality Madeira wines, and prevails totally dedicated to the preservation of the Madeira wine production traditions whilst maintaining the highest quality standards.

In 1925 Blandy's decided to join the Madeira Wine Association; a group of wine companies formed together to maximise global exposure and minimise overheads in a world where the export market was experiencing an all time low. Led by the Blandy family, this association managed to survive the bleak years whilst many individual companies fell by the wayside.

In 1989 in order to further expand the global market, the Blandy's approached another Anglo-Portuguese family, the Symingtons of Oporto (Port producers since the 19th century) and offered them a partnership in the newly named Madeira Wine Company (MWC). This partnership continues today.


In 2000 the Blandy’s Madeira Wine Company led the way with the introduction of a high quality but affordable Madeira of a single year (known as "Colheita" in Portuguese); "Blandy's Malmsey 1994 Harvest".
This was the first dated Madeira ever launched other than the very expensive and rare Vintage Madeiras. Wine merchants and consumers in many countries welcomed this fresh new thinking for quality Madeiras. Since then many other Madeira producers have again followed the MWC lead by introducing younger dated wines, thus creating an important new category of premium Madeira.

In July 2002, Blandy’s Madeira again launched a completely new style of Madeira with a radical presentation, "Blandy's Alvada". The wine is different to anything that has been produced before as it combines 2 noble grape varieties, Malmsey and Bual to arrive at a superbly balanced wine that combines the rich flavours of the Malmsey with the more complex and drier structure of the Bual. Once again Blandy’s MWC has challenged the accepted wisdom.

Today Michael and Chris Blandy, members of the 6th and 7th generations, continue to work in the company, which is today run by Chris, and is the world’s leading producer of premium quality Madeira wine.

Today, the company continues to lead the way in the re-establishment of Madeira as one of the world's great wines.
Displaying 1-3 of 3 results.
239054320